Skip to content
Earlier last month, our seniors attended a talk about accessing hospital-level care treatment from the comfort of their own home. With recent events, it is essential that our seniors are aware of where and how to get the medical help that they need! We hope that the introduction of hospital-in-home service that is available 24/7 so that our seniors can manage their healthcare plan well. 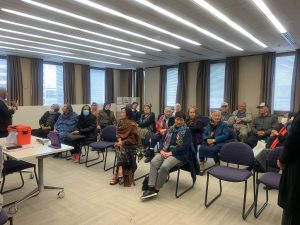 CHSP Seniors listening to the My Hospital Home Talk 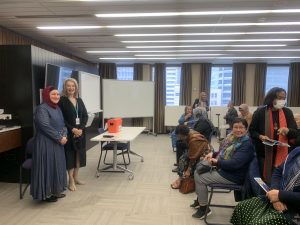 Kelly Fraser, guest speaker from My Hospital Home with CHSP participants and MWASA staff
Thank you to Kelly Fraser and Jennifer Hill from My Home Hospital for your time and introducing our seniors to the multiple services available to them!

The Muslim Women’s Association of SA has continued growing a diverse and supportive online audience throughout 2019.

The email subscription option for service providers has been well received and new friends are regularly subscribing through our website.

This is terrific as the internet is the fastest and easiest way for us to share information about our programs and upcoming events!

Scroll down to see our number 1 most popular post of 2019, and along the way remember what a wonderful year 2019 was…

Thankyou for your clicks and comments in 2019 and we hope to stay connected in 2020!

The CHSP (Commonwealth Home Support Program) celebrated last Eid al Adha at the Al Salam Centre, Marion Mosque. This program was the first joint effort between MWASA (Muslim Women’s Association of SA) and ISSA (Islamic Society of South Australia). Twenty seniors attended the event. The venue was big and conducive for the event; the seniors found the venue good and accessible.

Sister Nurhayatie presented a talk on the Wisdom of Hajj (the pilgrimage to Mecca).

Firstly, she talked about the significance of fasting in the first 10 days of Zulhijjah (the twelfth and final month of the Islamic calendar).

Then, she talked about the history of Prophet Muhammad SAW and his trip to Mecca and the beautiful ayah that he would like to convey to his people.

Hajj: As we know it, hajj is the peak of the ibadah (worship) that we can do. It takes a few days to complete it and by taking care of our 5 daily prayers, fasting and charity, hajj will be much more meaningful and special.

Sister Nurhayatie also talked about the last khutba (religious sermon) and the last message from Prophet Muhammad SAW. The participants were very attentive and engaged during the talk. Some shared their experiences from during their Hajj.

The seniors socialized with each other on that day and enjoyed a provided lunch. Flyers for upcoming events were distributed to the seniors on the same day.

*SAW = SalAllahu alayhi wasalam, meaning peace be upon him and usually following the name of Prophet Muhammad

Clearview Bowling Club offers both social and competition bowling and is very welcoming throughout the year to individuals and groups that wish to learn the game of bowls. There were 12 CHSP (Commonwealth Home Support Program) members that participated in this lawn bowling activity.

The weather was sunny and pleasant on the day. Three club members welcomed our group and provided coaching, sharing information about the rules and regulations before starting.

Everyone equally participated in the game and played with great enthusiasm. They enjoyed the bowling session so much that they requested for extended time.

After bowling, it was time to replenish. Refreshments were provided and the group also brought food to share with each other.

Overall the feedback was very positive, one Brother can be quoted as saying that “the bowling was a good workout session and that the coaches were very helpful and patient”. 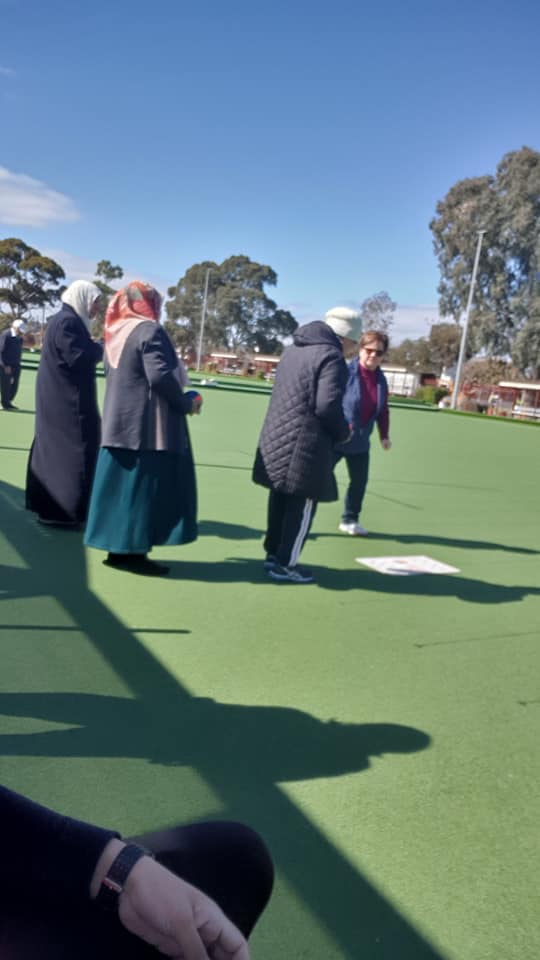 A walk to the Botanic Gardens was organised to engage CHSP (Commonwealth Home Support Program) members in healthy activity while also enjoying the beautiful landscapes of the Botanic Gardens. The Adelaide Botanic Garden is a 51 hectare public garden at the north-east corner of the Adelaide city centre, in the Adelaide Park Lands. It encompasses a fenced garden on North Terrace and behind it the Botanic Park. Work was begun on the site in 1855, with its official opening to the public on 4 October 1857.

The weather was sunny and pleasant on the day. Some of the group took a taxi from the office to the Botanic Gardens whilst others made their own way directly to the Garden. Twenty members participated in the session and were accompanied by Sister Sitiurika and Kamaljit.

Sister Rabia led the walk. The group visited the Lotus Garden, Herb Garden and also the tropical trees garden. The seniors enjoyed the leisure walk as they chatted and caught up with one another and talked about the plants and trees that were found in the tropical garden.

The walk ended near the main gate where everyone sat and rested by the lake and enjoyed sharing their food.

The visit ended with a group picture to be kept as a reminder of this wonderful outing. 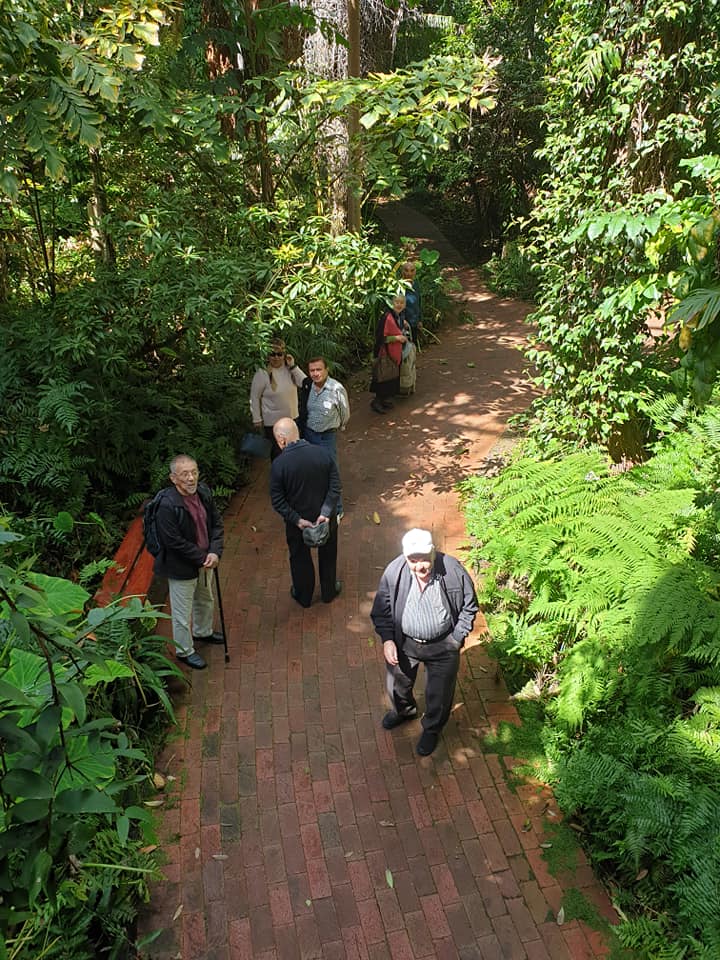 The most recent senior’s trip took them to the Old Bazaar Market, located in Salisbury Downs.

The Old Bazaar Market was inspired by the worlds oldest shopping mall: The Grand Bazaar of Istanbul. At 2,000 square metres, the Market is one of the largest multicultural family function centres in Australia. There is entertainment for the whole family: a games arcade and indoor trampoline; however the Turkish tea was of more interest for our crowd.

Everyone was very keen for this trip and ready to board the bus on time. Upon arrival, our group of 15 explored all the shops (including the nearby Hollywood Plaza). Everyone then reconvened for a refreshing afternoon tea and to admire the beautiful decor of the Bazaar.

These regular activities are a wonderful opportunity for our seniors to get out and about in good company, and to chat and catch up with each other. 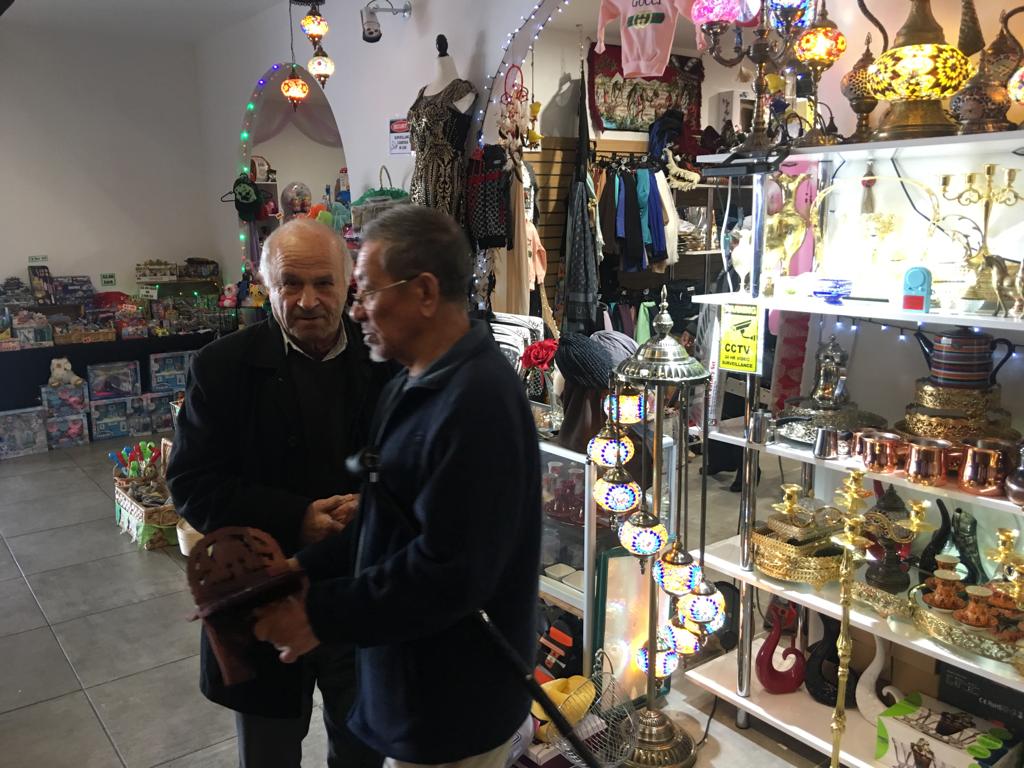 Earlier this month our office received a call from Sister Fadilah, a participant in our program which specifically supports senior Muslims in the community. She requested for someone to visit as she was feeling a little lonely. June Aini Hussain, Community Development Officer, visited immediately the next day.
Sister Fadilah shared that she had experienced a fall and as a result was not able to move around. She had broken her hip and the Doctor had asked her to minimise movement so that it can heal quicker.
The Sister’s conversational skills had not deteriorated at all and both thoroughly enjoyed chatting about many things across a couple of hours – and across some famous Bosnian coffee and scrumptious home-made cake!
Fadilah showed June some photos taken at past MWASA events; she enjoyed her younger days when she participated in many different MWASA activities. Fadilah’s daughter, who is also her carer, was also present. Sister June updated them on the current program and is investigating how MWASA can further assist in this case.
If you know a senior community member aged 65 years and over who could benefit from MWASA/CHSP services and programs, please visit the program page for further details on eligibility and registration. Alternatively, please call our office during office hours on 08 81212 0800 and ask to speak to June.

This is the third year that the CHSP (Commonwealth Home Support Program) has run a Tai Chi program.

Tai Chi is a form of gentle exercise that is described as meditation in motion. Having originated from China as a form of martial arts, Tai Chi has long been popular among individuals in order to keep fit and prevent disease.

Vivien, Susan and John demonstrated the basic movements for everyone to follow. They went on to demonstrate some martial arts movements and proper breathing techniques.

Ten participants were present at this first session, a good number considering the gloomy weather outside. Overall the class was very successful, both the men and women were keen to learn and participate. 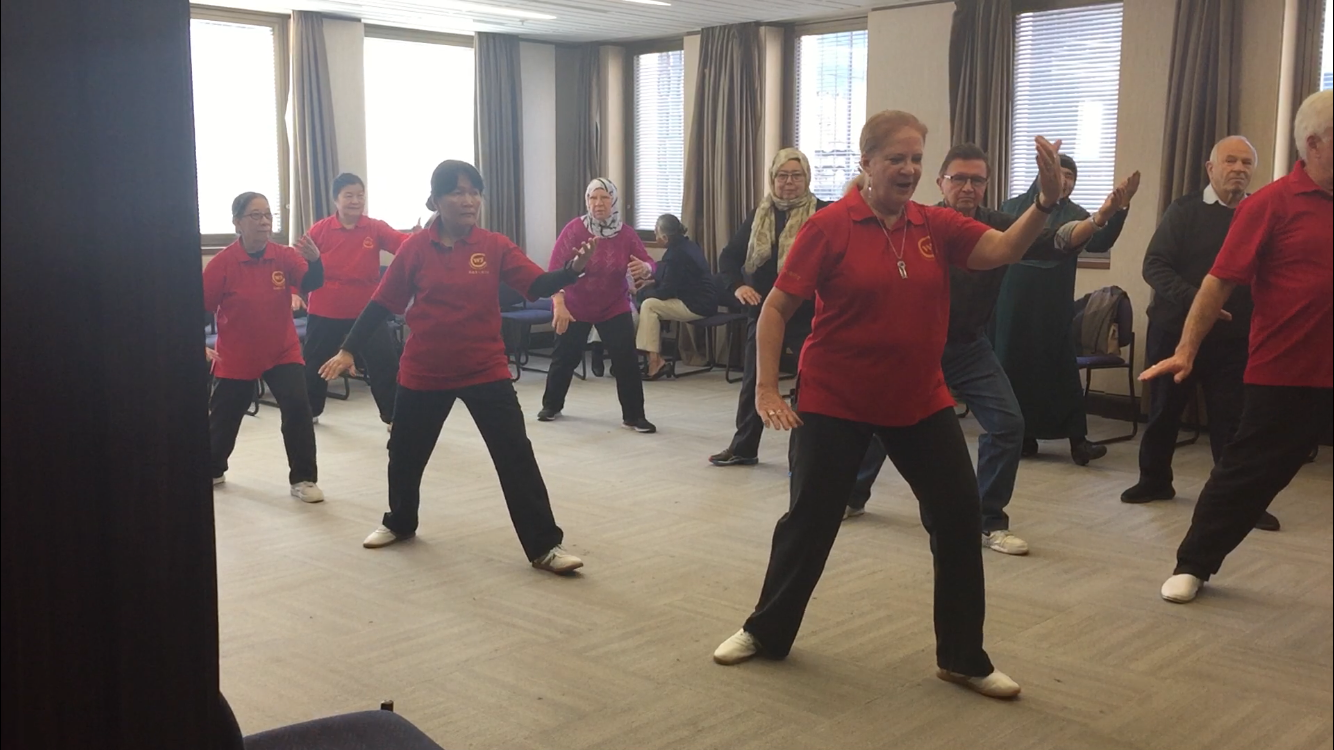 Community Development Officer June welcomed everyone with a short speech, thanking them for attending and letting everyone know about some very exciting activities coming up.

Everyone was so pleased with the day, the feedback was that the buffet food was amazing, the ambience was great and the members thoroughly enjoyed catching up with good company.

Thanks must go to the restaurant owner Ijaz, who was very kind and hands-on in assisting and serving our group throughout lunch. 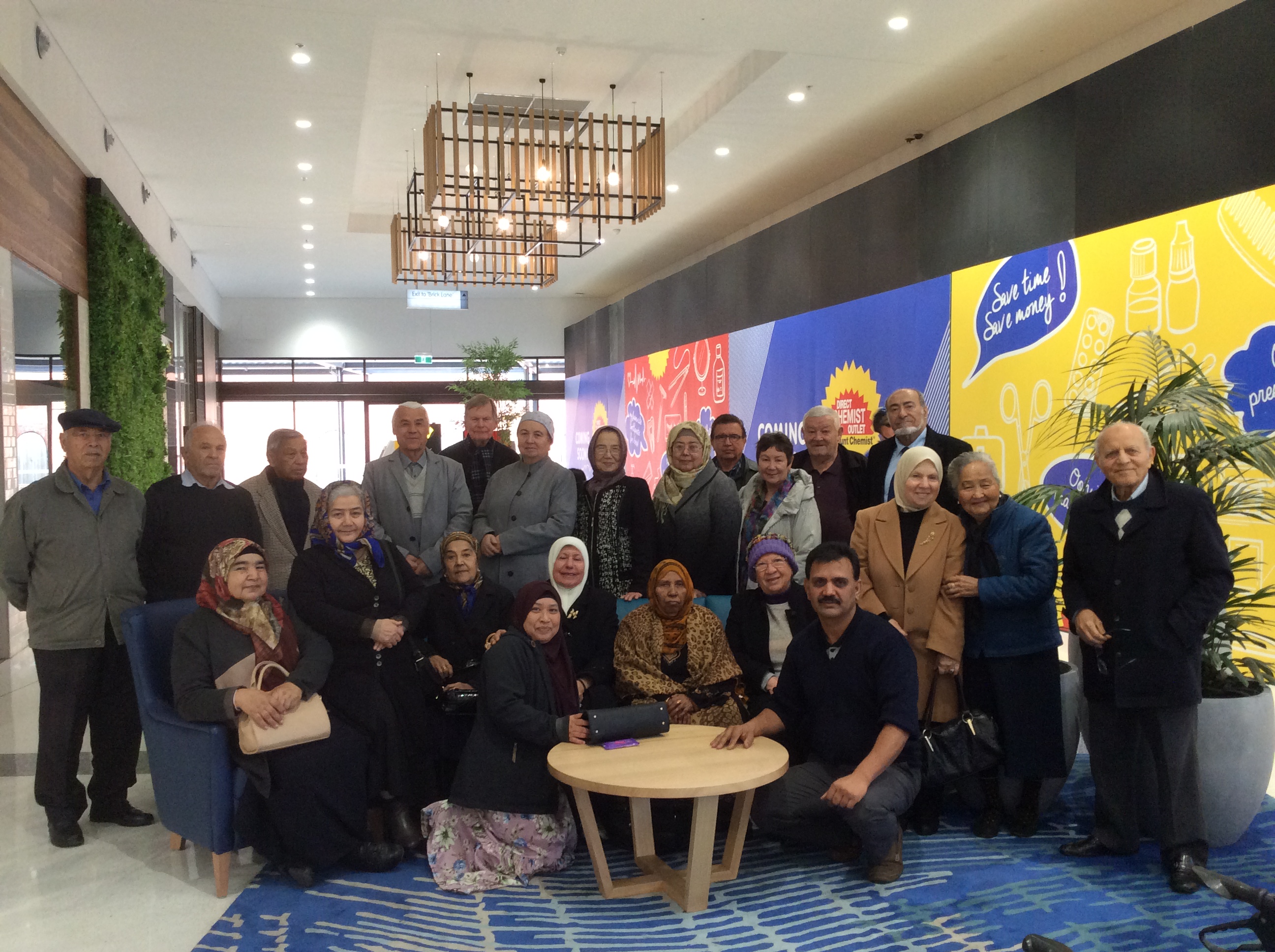